An animal prosthetist transforms the lives of 2 Chihuahuas born without front legs - THECHOWANIECS.COM Skip to content

Thor and TurboRoo haven’t stopped running since they received their gifts from the animal prosthetist Derrick Campanaof the company Bionic Petsbased at Sterling in Virginia (eastern United States). Their story is told by Nerdist.

These are tailor-made carts allowing these Chihuahuas born without front legs to move much more easily and enjoy additional freedom.

These canids had adapted to their handicap and moved by leaping on their hind legs. However, their masters wanted to help them to have more mobility, a way for them to thank them for the precious service they render to their family.

Thor and TurboRoo are, indeed, the father’s therapy dogs, AJ. The latter is a former soldier suffering from post-traumatic stress. They largely contributed to his rehabilitation and his return to normal life with his wife. Ashley and their child.

So they called on Derrick Campanawhich has designed wheeled devices for the 2 dogs that are perfectly adapted to their morphology.

A device that changes the lives of these dogs

In this video below taken from an episode of the series “The Wizards of Paws ” on National Geographic Wildwe witness the arrival of Derrick Campana at the house of AJ and Ashley to equip their dogs with their new carts. 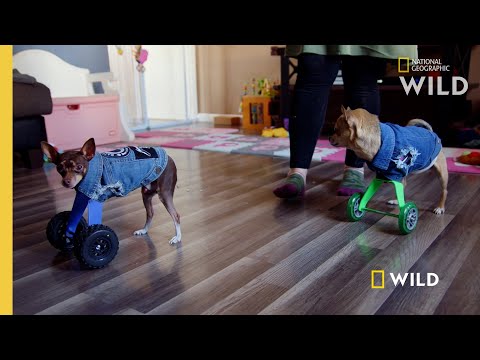 We also see the first reactions of Thor and TurboRoo trying out their devices. If the first quickly learned to use it, his congener seemed a little more hesitant, which is completely understandable. Eventually he got used to it, however, and has been happy to wear it for running outside ever since.

These carts have truly changed the lives of Chihuahuas, who can now live a completely normal dog life.

A graduate of a Master in Writing, Alexandre has been a dog lover since a very young age. After growing up with many dogs, this adorer of the Beaucerons unearths you every day the news that will move you and inform you about our favorite companions.