While a family in Nashville, Tennessee (USA), was doing construction work to move into their new home, they came across two kittens perched on a wall. Thinking the mother would be nearby, they decided to wait for her to return, but after a few hours there was no sign of the mother cat and the kittens were hungry. The family therefore contacted the Nashville Cat Rescue.

The felines were apparently 2-3 weeks old, so they felt they would be better off with a lactating cat. Kiki, a volunteer from the rescue center, decided to step in and help the little ones.

She had two rescued cats named Olive and Pickle. Fortunately, they had just had their babies and could help raise the two rescued kittens.

A kitten found on a wall looks like two different cats

The kittens were apparently the same age as Olive and Pickle’s cats. Kiki took them in so they could be accepted by both moms and have siblings to play with.

One of the kittens was born with a perfectly split face, one half is black with orange spots and the other is covered in orange stripes that make it look like two different cats. It’s possible the cub is a chimera cat, a kitten whose DNA on one side of the body is different from that of the other.

“Technically, I think only a DNA test can prove that. »

The little kitten is very happy to be safe in the care of Kiki, who named her Apricot and called her brother Pretzel. When the volunteer from the shelter wanted to introduce them to Olive and Pickle, one of the cats rushed to pick them up as soon as she heard the kittens crying.

“Olive took them from my hand, brought them to Pickle and they started grooming them. »

Pickle was more sociable than Olive, she let herself be cuddled and was the first to give birth to 6 beautiful kittens. Unfortunately, one of her kittens did not survive, but she was a devoted mother to her babies.

Olive is wilder and just watched Pickle to see what was going on and make sure they were safe.

Kiki is very happy with her two cats which look alike like two drops of water. When she adopted them, they did not want to separate them in any way. 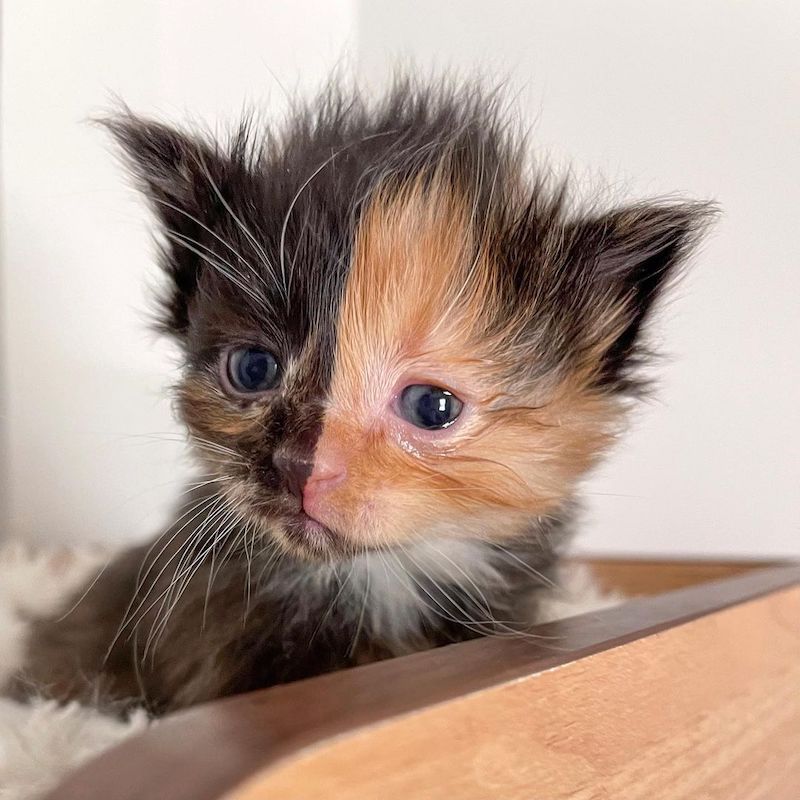 © INSTAGRAM/ KITTENITWITHKIKI The new litter members have been well received by this loving family of felines.

Apricot and her brother are growing up with their foster family, and before long they will all be ready to find their forever home and start a new chapter. happy with their life.

You can learn a little more about this gorgeous kitten and her extended family by visiting Kiki’s Foster Family Instagram account.