My cat cleans the windows by rubbing with her front paws, why? - THECHOWANIECS.COM Skip to content 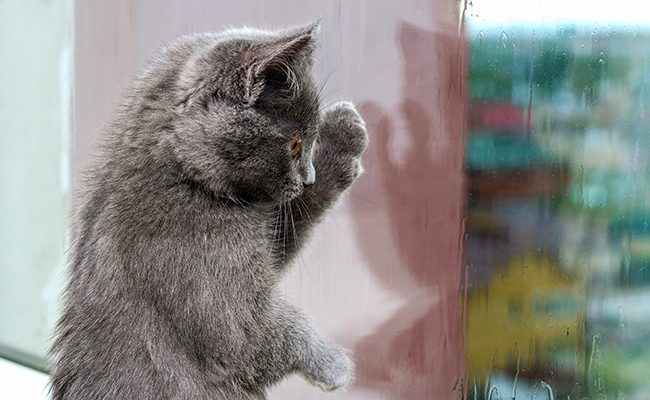 Some cats scratch windows and mirrors with their front paws as if they wanted to polish the tiles. They position themselves on their hind legs, sitting or standing, and frantically rub windows, cupboard doors or mirrors with their pads. Generally, they switch right paw, left paw, in an enthusiastic movement.

There are various reasons why a cat feels the need for it scrub smooth surfaces with its bearings. Why do they adopt this adorable mania which generally amuses us greatly? Here are some explanations about this cat oddity!

A cat can scratch windows or mirrors just out of curiosity. In fact, the fact of rubbing something with his paws allows him to learn more about the object, to better identify and understand it. If on this occasion you react and interact with him because you find him funny, your cat will quickly understand that this behavior provokes a reaction from you. He will therefore renew this action to attract your attention.

The need to relax

If your little friend is feeling anxious, whether contextually or simply for their own reason, they can act on smooth surfaces to reduce stress and calm. It is also an option for him deposits of pheromones, the calming hormones that sit between his pillows. It can also cover his need for movement if he lives in an apartment.

By rubbing the glass, your cat leaves smells imperceptible to humans, but which congeners will not miss. These smells allow him to do so mark its territory, to define its perimeter. On the windows, he warns both the other companions of the house that the space is his, but he also warns those outside who might think of entering.

The urge to go out

The cat is an intelligent animal. Scratching a window or door will generally elicit a reaction from you. Maybe you’ll even open that door or that window for him. It will then be a way for him toexpress a desire to leave or return. This will be the equivalent of knocking on the door for a human.

If it’s an apartment cat, that doesn’t stop it from wanting out, especially when it sees or smells prey on the other side. It is then his hunting instinct that motivates him. He thus expresses his frustration at not being outside to run after the bird or the mouse, whose freedom is almost a provocation for the little feline!

Your cat thinks it sees a fellow cat

Whether it is the reflection of a window or a mirror, a cat, especially when it is still a kitten, does not always understand that the returned image does not correspond to a congener. When he thinks he sees another animal in front of him, without being able to touch it, feel it or even scare it away, he can begin to rub the surface to remove “what is blocking” to gain access to the animal facing him. In general, cats eventually understand that this will have no effect, but depending on the individual, it takes more or less time.

Can a cat scratch the window or mirror by rubbing?

In general, cats do not put their claws on this type of surface and therefore do not damage the glass. Even with all the claws out, the material is strong enough not to suffer from cat attacks. But the noise caused by friction can be annoying, especially at night when they pierce the silence. If the mirror has a fragile frame, it may suffer more from the repeated passage of your companion’s little paws.

The danger primarily concerns standing mirrors which can topple under pressure from the cat, otherwise it is not a dangerous behaviour.

How do you prevent a cat from scratching windows or mirrors?

It is more often a mania for kittens. It becomes rare when they grow.

The ideal is to not paying attention to him not to encourage or stimulate it. But if you’re reading this article too late and you’ve already responded positively to his behavior, if you still want to see him stop, you’ll need to strategize differently.

He is hard to forbid a cat what it does instinctively, especially if they were well received the first time. Unlike the dog, who is sensitive to his master’s pleasure, the cat will only agree to change his behavior if he gets something more interesting. The ideal is therefore to distract him from his action with an activity that pleases him more. Then enrich its environment with toys, feather pillows, scratching posts and cat trees. Offer him something different every time he scratches a mirror.

Alternatively, you can add Double sided tape. Cats don’t like to put their paws on sticky things. ONE repulsive regular spraying can be effective, but you will have to repeat the operation very often, which is restrictive. Finally, a final solution is to cover the mirror, but this only provides a temporary answer and does not solve the problem.

Offer your pet similar surfaces where you don’t mind scratching or rubbing their paws. Also add different scratching posts, vertical and horizontal. Although not as smooth, they will play their soothing role and provide your little companion with a source of comfort and relaxation.

Yelling or hitting a cat is under no circumstances effective. On the contrary, it causes additional stress, stress that he may want to soothe… by rubbing mirrors and windows! He doesn’t understand cause and effect, only that you are angry without understanding the cause. If he suddenly runs away, it is not because he feels guilty, but because he feels you are unhappy.

If it reproduces this behavior too often and it is problematic for you, consult a cat behaviorist which will help you and adapt the strategy according to the context, your relationship with your cat and its surroundings.

Cats that “check” therefore react according to different factors, both curiosity and anxiety. Some can even scrub the walls. Often it is several young cats that act in this way. This is not a dangerous or worrisome behavior, but it is necessary to be careful with the mirrors on the feet if they are not very stable.