When the little Thor was found in a park by Laila D’Souzafounder of the Winston Memorial Foundation, he was just skin and bones. The young fighter was the only survivor of his litter, says Laila at lovemeow. She then brought him to a local shelter, where he will find the human warmth he needs.

A brave and stubborn little feline

Shy at first, the kitten gradually learned to ” trust humans ” recount Haneen Alrabeah, his new foster mother. She made sure to feed him his fill and offer him a cozy and comfortable nest, he who had known very difficult beginnings.

Ready to go on an adventure, Thor will take a liking to a cat already present in the shelter, namedAlani. The 2 felines share the same red dress and will soon share many other things…

The cat was initially not very enthusiastic about the idea of ​​being followed everywhere by this little pot of glue. She growled every time he approached her. Luckily, she eventually got used to the tenacious kitten, and ended up turning her growls into love-filled purrs! 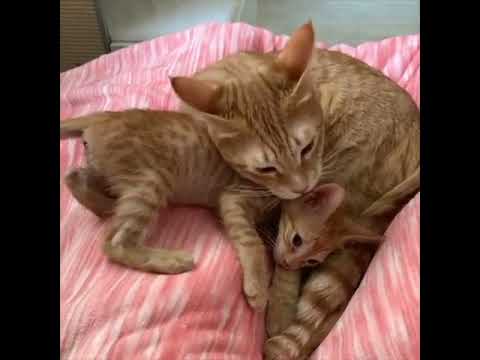 Haneen recounts the evolution of the relationship between Thor and Alani, yet started off on the wrong foot. The young kitten now feels happy and safe » fromAlanithat he took ” under his wing » and who loves to share countless gaming sessions by his side.

Alani had also been saved from wandering. All the love she received when she arrived at the shelter, probably pushed her to return the favor to the young kitten completely in love with her new mother. A daily dose of happiness and admiration for Haneen.

A great friend of animals from a very young age, Maria gives them a real devotion and follows them everywhere on social networks. Coming from a linguistic course, and therefore very keen on writing, she now takes pleasure in rubbing shoulders with the animal world accompanied by her most faithful four-legged companion, Monkey.