Syria: lawyers call for the emergency repatriation of a French child - THECHOWANIECS.COM Skip to content

Two lawyers asked the French authorities this Friday August 26 to organize the “emergency repatriation” of a seriously ill minor currently detained in the Kurdish camp of Roj in Syria.

His life is threatened. This Friday, August 26, two lawyers asked the French authorities to organize the “emergency repatriation” of a seriously ill minor currently detained in the Kurdish camp of Roj in Syria.

The state of health of one of the minor children of Estelle K., “left for Syria with her three minor children and her husband in 2014” and “prisoner” since 2017 “in the region of Deir Ezzor”, is thus judged “extremely alarming”, according to lawyer William Bourdon and his colleague Vincent Brengarth.

“His life is in danger. The undersigned urge the government to proceed with the urgent repatriation of this child and his family,” they wrote in their letter to the authorities.

According to them, a French cardiologist seized of the file estimated that “an emergency repatriation is essential. His condition requires that specialized care be carried out”.

The two lawyers also deplored that the “correspondences addressed to the Ministry of Foreign Affairs remain unanswered today”.

On July 5, 16 women and 35 minors, some of whom had been living since the fall of Daesh in 2019 in camps in northeastern Syria held by Kurdish forces, were brought back to France. 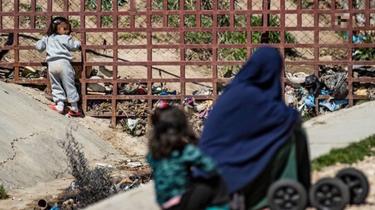 All the women, targeted either by an arrest warrant or by a search warrant issued by the French courts, were indicted for association with criminal terrorist criminals and imprisoned, upon their arrival on French soil or at the end of a few days in custody. The children were cared for by Child Welfare.

During his first five-year term, President Emmanuel Macron was very reluctant to bring back French nationals who had left to do jihad in Syria, aware that a large majority of French people were resolutely hostile there. Only a few children have been repatriated, according to the “case by case” doctrine.